Alan Carr's Epic Gameshow (or Epic Gameshow) is a five-part miniseries where five classic British game shows (mainly from Fremantle's library) are recreated. Name That Tune was one of them and it will be the only show covered here. It originally premiered in series 2 in 2021. The civilian version aired on 24 April while the celebrity version aired on 15 May.

The other four (in Series 2) were:

Four contestants compete in this classic game of music identification, for the right to play for £25,000. But regardless of who gets that chance, all winning contestants get to keep any money they would win along the way.

The contestants race to see which three of them will name three tunes first. The first three to do that will move on to the next round. The fourth place finisher, would be eliminated from the game.

Round 2: Wall of Music

The Round was played with six categories. The surviving contestants play individually and taking turns naming songs related to the categories and winning money in the process.

The player in control selected a category and a song related to the category was played. Meanwhile as the tune was playing, a money clock ran down. It stopped when he/she hit his/her buzzer to name the tune. A correct answer won the remaining money, but an incorrect answer or no answer won nothing.

The two players with the highest money totals moved on to Bid-A-Note, while the third place finisher was out of the game.

Alan would read a cryptic clue to a song, and the players would alternate bidding as to how few notes they needed to identify the song (as in "I can name that tune in three notes"). The maximum bid is ten notes. Bidding ended when one contestant finally challenged the other to "Name That Tune", or when one player bid one note. After bidding, a pianist's hand would show to play the notes, after which the player had to name that tune. If the player was correct, he/she scored the money for that tune, but if the player could not name it, then the opponent will have a chance to steal by hearing all ten notes. Three tunes are played, with the first two tunes worth £1000 and the last tune is worth £3000.

The player with the most money at the end of this round, wins the game, and goes on to play the £25,000 "Epic Golden Medley" bonus round.

The object of the game was to name seven tunes in 30 seconds and win £25,000. The champion stopped the clock by hitting a buzzer, which was a cue for the band to stop playing, and could either give an answer, or pass if he/she was not sure. Once all the tunes were played, the champion went back to play the passed tunes (if there were any). Unlike in America/Australia/Ireland, an incorrect guess does not end the game, it only throws the missed tune out of play. Each correct tune is worth £3000, however if the winning contestant can name all seven tunes before the 30 seconds runs out, s/he wins the £25,000. The maximum grand total for any one player is £32,500.

While previous episodes of the series caused a stir among viewers, fans[1] loved this episode in general as they were all asking Carr that if he could be a permanent listing.

One Twitter user named Sylvia tweeted: "Please @ITV @chattyman can we have Name That Tune every Saturday Night #EpicGameShow?" while another one named Rich tweeted: "I reckon #NameThatTune could be a proper Saturday Night, shiny floor winner." 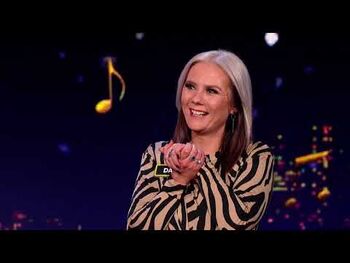 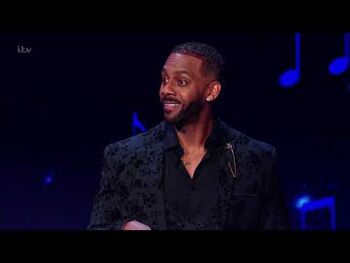